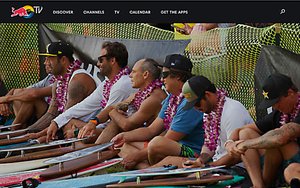 Red Bull is launching an original online TV series that focuses on entrepreneurs in the action sports industry.

Directed by Peter Hamblin, the show offers a unique approach to storytelling with fast-paced graphics and images used to capture the narrative. Each episode tells the story of the early years, moment of inspiration and the brand ethos.

"For 'The Ripple Effect,' we explored some of the biggest and most influential names and brands in the world," Hamblin says in a release. "From athlete testimonials to original footage, we went behind the scenes to provide a never-before-seen look into the game-changing innovators that will forever leave an impact on action sports."

Episode one features GoPro’s Nick Woodman, who was a traveling surfer looking for a better way to document his own wave-riding adventures when he came up with the idea for a wearable POV camera.

Episode two focuses on Vans’ Steve van Doren. From the brand’s inauspicious start to connecting with distinct subcultures, Steve Van Doren tells the story of how his father, Paul Van Doren, and uncle, James Van Doren, founded one of America’s most iconic shoe brands 40 years ago.

“The Ripple Effect” is an on-going series. A second full season will launch later this year, putting the spotlight on the technology industry. Red Bull TV is distributed digitally across mobile phones, tablets, consoles, OTT devices and smart TVs.