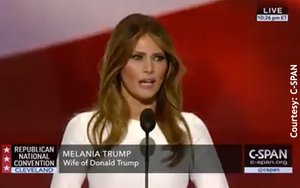 Twitter was abuzz on Monday with the 2016 Republican convention.

From 1 p.m. on July 18, to 1:30 a.m. July 19, around 80% of all digital content engagement around the GOP convention mentioned Donald Trump, according to U.S. only Twitter data gathered by marketing tech company Amobee Brand Intelligence.

Melania Trump was mentioned in about 20% of those tweets and former New York City Mayor Rudy Giuliani, who gave a particularly expressive and fear-mongering speech, earned 7% of tweets about the convention.

Overall, within the time frame specified, there were 1.28 million tweets that contained #RNCinCLE, 170K that tagged #GOPconvention, and #RNC2016 was tweeted 79K times.

There were 1.13 million tweets about Donald Trump, but sentiment around the candidate remained more negative (21%) than positive (16%), 63% of the tweets were considered neutral by Amobee.

While Trump clearly had strong support at the convention, real-time viewers from around the country were not convinced, at least considering what we can extrapolate from Twitter sentiment data.

The first day of the Republican convention took aim at Hillary Clinton.

The presumptive Democratic nominee, who will be in Philadelphia next week for her own convention, was mentioned in 168K tweets. Sentiment around Clinton was 19% negative and 10% positive, not surprising, considering the tone and rhetoric yesterday in Cleveland.

Melania Trump, however, despite being accusesd of lifting passages from Michelle Obama’s 2008 convention speech, was viewed favorably on Twitter. While a majority 64% of tweets were neutral, 21% of the tweets about Melania Trump were positive with 15% expressing negative sentiment.

The issue of plagiarism nevertheless made a mark on Twitter, by 4 a.m. ET, there were 259K tweets with the #FamousMelaniaTrumpQuotes tag. Further, 29% of all digital content engagement around Melania Trump was related to Michelle Obama.

Beyond the realm of politics, Stephen Colbert saw a meteoric rise in Twitter engagement between July 18 and 19. His saw a 421% increase in engagement when compared to the period between July 16 and 17.