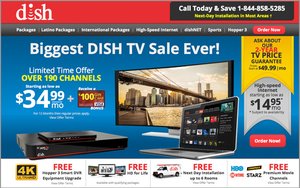 Dish Network’s subscriber losses have picked up steam in the second quarter.

Dish lost 281,000 subscribers versus 81,000 in the same quarter a year ago. This includes results from its digital video service Sling TV.

Initially, Dish stock price sank 4% after the news was released early Thursday. But by mid-day the stock recovered -- down just 0.2% to $51.87.