SteelHouse alleges in the counter filing that 52% of Criteo’s clicks do not originate from any known Web site or publisher. SteelHouse uncovered these findings after analyzing third-party customer data that showed the source of Criteo’s traffic for customers that were active with both SteelHouse and Criteo since January 2016.

Criteo filed a lawsuit against SteelHouse in June, claiming that the U.S.-based company undercuts its business and stole potential clients by counterfeiting clicks, which often happens seconds after legitimate clicks are attributed to the France-based company.

SteeHouse alleges in the lawsuit that 16% of Criteo clicks are from users clicking the same advertisement within a 30-minute period, eight times the industry standard.

The suit also states that Criteo’s pricing model deceives customers into believing that increasing the cost per click (CPC) bid will yield better performance for the customer. Instead, the increased bid results in no additional traffic for the advertiser, according to SteelHouse.

SteelHouse, of course, denies in the counter suit that it has made false statements and that it counterfeited clicks. The counterclaims state that Criteo stifles SteelHouse’s competition in the online advertising market. In the counterclaim it asserts that Criteo promises customers the most clicks per ad in the industry and "its click rate is somehow four times as high as the rest of the industry."

In response to the suite, SteelHouse explains the difference of its targeting and attribution model when compared with Criteo's, which the company claims could be the crux of the suit. "Rather than follow Criteo’s click-based model, which only attributes value to the last click before a consumer arrives on an advertiser’s website (a practice that leads to unfair and inadequate results), SteelHouse—like others in the industry—takes a more holistic approach and assigns value to ad impressions or view throughs.  SteelHouse thus reports view throughs in its User Interface to its clients and reports those same view throughs to Google Analytics."

SteelHouse's response also suggests the two companies share few customers, rely on different attribution models, and that Criteo has no basis to its click-fraud accusations. 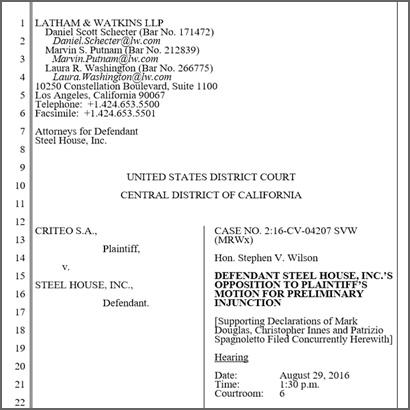