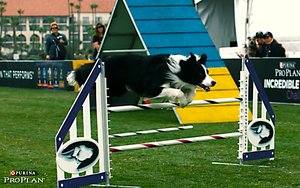 Purina Pro Plan wondered how Olympic athletes might stack up against some of the greatest canine athletes.

The first video of the series focuses on agility. May-Treanor goes head-to-head against Schemer, a canine competitor, in a variety of athletic events. Schemer is one of the top canine competitors in the Purina Pro Plan Incredible Dog Challenge, an “Olympic-style” event where the top canine athletes from around the country compete in a series of events, several of which are showcased in the video.

This episode breaks down the differences between the performances of these two very different athletes, looking at variables like velocity, trajectory and nutrition, with the help of Dr. David Raichlen from The University of Arizona and Dr. Brian Zanghi from Nestle Purina.

“The second two videos will showcase different skill sets from Misty and canine competitors and will be released in conjunction with the Summer Games,” Allen tells Marketing Daily.

The video series is targeted at dog lovers as a whole.

“We believe that the talented dogs featured in this series are fun to watch for all especially  when matched against such a prominent American athlete,” Allen says. “We hope that through these videos both owners that feed their dogs Purina Pro Plan and owners that do not will be able to see the science behind Purina Pro Plan and how the food delivers optimal nutrition to all dogs as well as the benefits that can come from proper nutrition.”

Trace Worthington, a two-time Olympic skiing competitor and commentator for the Purina Pro Plan Incredible Dog Challenge, hosts the video series and serve as the voice behind the physical and nutritional science being shared in the series.

“Misty’s strengths as a pro beach volleyball player were also great to compare to a dog in an agility, power, and speed analysis,” Allen says. “Olympians are also well known for their balanced diets and training regimes, and we believe that these videos do a great job of tying together the fact  that these Pro Plan fed dogs are fueled by a diet that delivers optimal proteins and fats that allow dogs to train at their best. and strong training.”