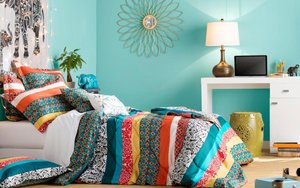 Don’t let the heat fool you: The back-to-school shopping season is in full swing, and a new report from Deloitte says college bound kids are eager to up their own investment in everything from chic sheets to new smartphones.

The survey finds 57% of students plan to pay for more than half of their shopping (even if only 16% of parents believe them.) Either way, it’s big money for retailers, with parents in the study projecting spending this year of $1,345 on necessities, while their offspring expect the total to be more like $1,082.

While all tech is top of their radar, computers are the biggest category, with Deloitte reporting that parents anticipate spending $673, and students $473.

"College-aged students are taking on more financial responsibility and have a larger say in purchasing decisions during back-to-school shopping,” says Rod Sides, vice chairman of Deloitte’s retail and distribution practice leader, in the report. “They're even willing to contribute more to the budget than parents expect."

The earliest shoppers are also likely to be the biggest spenders. Bookstores and college stores are still the top-spending destination (71% will shop there). But students are being especially thrifty this year, with 83% planning to buy used books, and 79% looking to buy from online retailers with free shipping. And 45% of the survey, based on responses from 750 parents and 1,200 college-age students, say they will use social media to help.

Last week, the National Retail Federation released its college forecast, with lower spending predictions than Deloitte: $888.71 per student, down a smidge from $899.18 last year. (But with more kids heading to college this year, total back-to-college spending is likely to rise to $48.5 billion compared with $43.1 billion.) The Washington D.C.-based trade association says that’s likely to include $11.54 billion on electronics, $7.49 billion on clothing,  $6.23 billion on dorm furnishings, and  $5.78 billion on food.

Separately, online retailer Wayfair has released its best-decorated dorms list, a ranking compiled by the number of Wayfair furniture, décor and lighting purchases made from university IP addresses, as well as shipping zip codes. Three of the top five are located in New York, led by Columbia University, New York City; Purdue University in Indiana; New York University; Cornell University in Ithaca, N.Y., and the University of Missouri in Columbia. The biggest sellers? Splatter lamps, convertible sofas and hammock chairs.