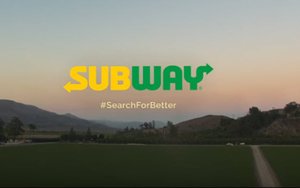 The first new brand spot, “Clean Slate” (see below), shows vignettes including a man exercising to extend his life, inspired by his young daughter; a female teen playing on a co-ed football team; a family adopting a dog from a shelter; and a disabled man pumping iron.

The message: “The search for better is one of our greatest traits as humans. It’s a new commitment. A bold move. Even a fresh start. This appetite for better is everywhere — in people, communities — and also at Subway. Every day, we’re finding new ways to serve fresh, locally sourced produce and food free of artificial preservatives whenever possible. Because the best way to stay fresh is to never get stale.”

Some of the people featured in the ad are “real people with real stories,” according to Subway, which used real employees in its “Sandwich Artists” branding campaign.

The QSR has also launched a sort of hybrid spot, “Everyone,” that promotes a new Chicken Caesar Melt sandwich, but also uses a variation on the brand tagline (“everyone wants better” chicken) and stresses that the rotisserie chicken was raised without antibiotics.

Both ads premiered on August 5 in prime time, during NBC’s coverage of the opening ceremony of the Summer Olympics. The ads are also being distributed across digital channels.

Content featuring some of the non-actors from the “Clean Slate” spot will content will be used across the brand’s social media channels, Subway tells Marketing Daily.

Subway’s Web site is also stressing the locally sourced message, while being equally careful to emphasize its food safety standards — no doubt in part to help head off any consumer concerns about locally sourced produce, in the wake of rival Chipotle’s disastrous food contamination outbreaks.

Subway’s “sustainable sourcing” corporate page notes: “Although the Subway brand benefits from the efficiencies of a centralized distribution network, we know our customers are increasingly interested in locally sourced products that help support local businesses as well as reduce the carbon footprint of the supply chain. Knowing this, our nonprofit, franchisee owned, Independent Purchasing Cooperative (IPC) tries to incorporate locally sourced products where ever possible provided they meet our stringent specification and are cost effective.” Another,  “homegrown” site page makes similar statements about produce sourcing, and also touts its other clean ingredients. 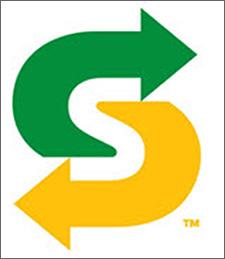 MMB, which was replaced as Subway’s agency of record by BBDO, created the spots. “BBDO is our agency of record and they are working on a number of projects for us,” according to a statement from a Subway spokesperson. “We also maintain a relationship with MMB, as well as other agencies, and often use them for creative projects as well.”

Subway’s updated all-type logo, a streamlined version (above) that eliminates the tilt and the color outline in its traditional logo, debuts in the two new ads.

The brand reports that the new logo and a new symbol — two arrows forming an “S” —  will be rolled out across Subway’s restaurants, communications and digital assets beginning in early 2017.