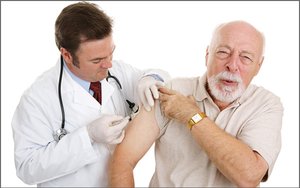 Kroger is linking flu shots to a cause-related campaign to fight hunger, and RiteAid is throwing in a digital vaccine overview, as retailers line up to make the same-old, same-old influenza season a little spicier for shoppers.

As ever, of course, while many people intend to get the annual vaccination, it often comes down to how easy it is to get. A new poll from CVS shows that 34% of people who have ever received a flu shot made the decision based on convenience, and that more would do so if it were easier to get the whole family immunized at the same time. (Two out five people in its survey say it took multiple trips to get the whole gang inoculated.)

Retailers, of course, rely on revenue from shots, with CVS reporting that some 46% of Americans say everyone in their family over six months of age gets an annual shot, and 59% say they either get the vaccine every year, or plan to get one this year.

But stores also count on the annual ritual to build brand loyalty, as well as other purchases that consumers typically make once they are in the store. So they’re looking for ways to sweeten the deal, even in advance of the flu season. (CVS says 46% of people say October is their preferred month.)

Kroger is teaming up with the Little Clinic and Feeding America, one of the country’s largest hunger charities, promising to donate one meal for every flu shot given in its pharmacies or in Little Clinics, distributed through Feeding America’s network of food banks.

CVS offers patients who get their shot at CVS Pharmacy or MinuteClinic location located within a Target store get a $5 Target gift card.

And RiteAid is adding a digital component, urging consumers to go online to its Vaccine Central site, and get their immunization history evaluated to see if they are missing any other vaccines, as well. It’s also marketing its ability for small employers to organize workplace flu clinics.