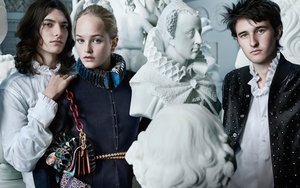 Burberry, which stunned the fashion world earlier this year when it said it would begin selling directly from the runway to consumers, is offering fans a peek at the new line, inspired by Virginia Woolf’s Orlando: A Biography. (For all you non-English majors, it’s a transgender classic from the 1920s, starring a man-turned-woman poet who stuck around for centuries.)

The new campaign, shot by Mario Testino in the sculpture gallery at Liverpool’s Walker Art Gallery, shows off the “contrasting masculine and feminine styles across different periods in history,” it says.

And on the same day as its fashion show, scheduled for Sept. 19, it also plans to unveil a partnership with The New Craftsmen, as well as a Testino-photographed campaign featuring the artisans behind some of its best-known products, including those who work in factories and mills in England, Scotland, and Italy. The campaign launch is set to focus on the Bridle, its newest bag. And it plans to feature programming and installations at Burberry’s new show venue, named “Makers House.”

The exhibit is timed to London’s Fashion Week. “Just as Virginia Woolf's Orlando is both a love letter to the past and a work of profound modernity, this week-long exhibition aims to nod both to the design heritage that is so integral to Burberry's identity, and to some of Britain’s most exciting creators, and the innovation and inspiration behind their work,” says Burberry Chief Creative and Chief Executive Officer Christopher Bailey in the company’s announcement.

Back in February, Burberry stunned the industry -- which has been struggling to find ways to keep runway shows relevant in a fast-fashion world -- with the news that it would move to seasonless, twice-yearly shows that combine men’s and women’s fashions. And rather than waiting months to buy those clothes, consumers will be able to buy the new looks, which it describes as “seasonless, immediate, and personal,” both online and in Burberry stores.

The first straight-to-consumer collection comes amid some turmoil for the venerable brand. Following the company’s announcement in July that comparable-store sales dropped 3%, it announced it would shift Bailey to his current role, and that he would be replaced as CEO by Marco Gobbetti, a veteran of the luxury world, set to join the company next year.