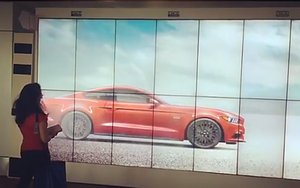 Ford Motor Co. has launched an out-of-home execution in India focusing on the Ford Mustang, which is new to market there.

Created by Kinetic Worldwide, the experiential activation has been installed at the Delhi and Mumbai airports.

“The arrival of Ford Mustang in India needed to stand-out and leave a lasting impression on everyone who experienced our touch-points. We wanted create an experience that personifies all that this iconic car stands for by innovatively demonstrating its fun-of-driving, legendary engine growl and raw power.”

With digital screens contextually placed in business and VIP areas, the content is triggered by passing travelers (who are also walking down red carpets) through Arduino sensors. Once the content is triggered, an air blower and powerful car engine sound are also activated. In addition to blowing air and releasing the sound of a ready-to-race Mustang, some locations also emit artificial smoke.

Designed to match the sleek, agile and powerful feel of the Mustang, the creative execution is aimed at capturing first and business class travelers’ attention through interactive, experiential displays "with attitude” across India’s airports.

The concept and technology could be implemented in other airports, although Ford declined to comment on whether it is under consideration.