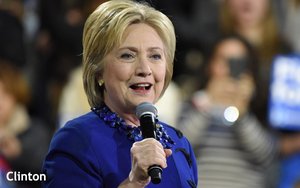 More than half of Clinton’s 2016 total national TV budget so far has been spent on the Rio Games -- $15.8 million, according to iSpot.tv. Since the first of the year, the Clinton campaign has spent $26.8 million in national TV advertising, with much of that starting July 1.

“Donald Trump for President,” the Republican candidate's presidential campaign, has yet to spend any national TV dollars -- nor any local TV/radio spending.

But it will begin to spend money locally on TV -- in key battleground states. Trump has plans to spend $4.8 million in Florida, North Carolina, Ohio and Pennsylvania. Clinton has already spent about $70 million in those states -- as well as Colorado and Virginia, per reports.

Many national political campaigns depend more heavily on local media -- especially in TV -- because of key races in battleground states.

In addition, Clinton is estimated to be spending another $80 million in TV advertising in September/October in Florida, Pennsylvania, Ohio, North Carolina, Iowa, Nevada, and New Hampshire.