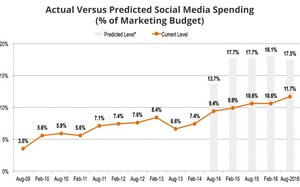 The good news for social media’s ad supply chain is that marketers have tripled their social media marketing budgets over the past seven years and it now represents 11.7% of total marketing spending.

The bad news: It is well short of what marketers predicted they would be spending seven years ago.

Those are the top findings from the latest installment of the CMO Survey, a collaboration of the American Marketing Association, Deloitte and the Fuqua School of Business at Duke University.

According to respondents of the biannual survey, marketers now spend about 11.7% of their budgets on social media.

“Companies feel the pressure to spend when they observe other companies spending and see a lot of hype in the media about social-media spending,” Christine Moorman, a marketing professor at Duke University’s Fuqua School of Business and director of the survey, stated, when findings were released.

She added: “But moving more deeply into the social and digital world of marketing requires a deep connection to the customer, and the ability to drive a transformation of the company to a whole new type of engagement. Most companies lack the knowledge and skills to make this happen.”

A big factor, according to the study, might be a lock of ROI measurement for social-media spending. Nearly half the respondents reported they have not been able to “show how their spending on social media has benefited their business,” and only 4.6% said it “contributes very highly to company performance.”

Another big factor, according to the survey, was that marketers failed to account for their competitors creating clutter in the marketplace with their own social media campaigns.

"Consumers are saturated with company involvement in social media, so that marketing is not as effective perhaps as it used to be," Moorman explained. "So firms are reducing their spending levels as a result."

To put the magnitude of social-media spending into perspective, the respondents estimated that their overall marketing spending currently represents 7.5% of overall company revenues and 11.3% of their total corporate budgets.
ad spending, social media
2 comments about "Marketers: Social Budgets Triple Since '09, Fall Well Short Of Original Projection".
Check to receive email when comments are posted.
Read more comments >
Next story loading