Maytag Looks To Clean Up Politics 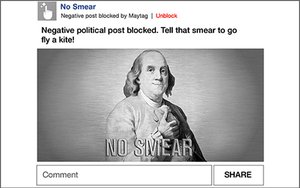 Politics is a dirty business -- and Maytag is ready to clean it up.

The company, which is launching a new line of fingerprint- and smear-resistant stainless steel appliances this fall, is looking to clean up consumers’ interactions with the presidential election.

“The connection between smears in [politics] and smears on appliances triggered a response for us,” Brendan Bosch, senior brand manager for Maytag, tells Marketing Daily. “We wanted to replace [negative content] with something that’s fun.”

The initiative was born out of a company insight that showed 73% of consumers had unfollowed, blocked or hidden posts from another person’s social media posts because they didn’t like the content shared.

Developed in partnership with University of Michigan professor and political scientist Arthur Lupia, Maytag’s Chrome plug-in combines keywords that may be linked to objectionable or negative content with keywords associated with the presidential campaign.

“As the campaign goes on, we’ll continue to update it to make it as relevant as possible,” Bosch says.

The plug-in, which only works on desktop versions of Chrome and on Twitter and Facebook, replaces the political content with a message that “negative content has been blocked” and an animation of patriotic images (such as an eagle or Uncle Sam) etched in stainless steel giving a thumbs-up. Users do have the option to unblock the content if they want to see it.

“Consumers get negative posts in their social spheres, and the only option is to block that user completely,” Bosch says. “This will help keep consumers from having to use that ‘nuclear’ option.”

To support the plug-in, Maytag has enlisted actress and comedian Abby Elliott to promote the “No Smear Campaign” on her social media feeds and in media interviews. The company is also working with satirical news site The Onion on a branded content section taking on the negativity of political discourse.