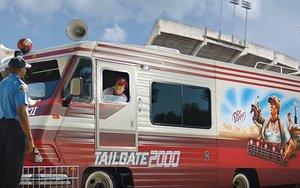 Dr Pepper, a charter sponsor of the three-year-old College Football Playoff, is bringing its popular crazy concessionaire character, “Larry Culpepper,” back for the third time.

This time the character, played by actor James M. Connor, is being sent on a real tailgating tour in a tricked-out RV called the “Tailgate 2000.”

The tour will make five stops to have Larry interact with fans: Arlington, Texas for the USC vs. Alabama game on Sept. 3;  Madison, Wis. for Nebraska at Wisconsin on Oct. 29; Atlanta for the SEC championship game on Dec. 3; Atlanta for the CFP semifinal (Peach Bowl) on Dec. 31; and Tampa, Fla., for the National Championship Game on Jan. 9.

The on-the-road adventures of Larry — who insists that he originated the playoff concept — are also being humorously documented in 10 television spots, starting with one introducing the Tailgate 2000 (below). That spot has been airing extensively on sports networks since Aug. 22.

The television ads, from Deutsch, will air throughout the season on ESPN, ABC, CBS, Fox and other sports cable and network properties.

The campaign’s digital efforts will kick off on Sept. 3, with a sponsored Snapchat lens that lets fans virtually become Larry, by donning his signature flip shades and Dr Pepper visor. Larry is also doing promotions such as live chats with fans on @ESPN.
During the same game, Larry's first Facebook Live video will debut. Fans will be urged to watch Dr Pepper’s Facebook page to see the character count down to kick-off from the Tailgate 2000.