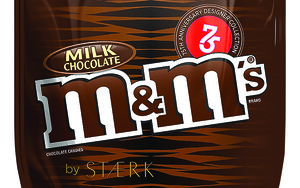 The M&M’s brand is going chichi for its 75th anniversary.

The packages, which will be available for a limited time exclusively in Target stores starting Sept. 4, bear a price befitting their designer label: $9.99 for a 42-ounce bag.

They’re being promoted through the brand’s owned social media, in-store displays and a cameo appearance in a Staerk handbag ad appearing in Vogue’s September issue.