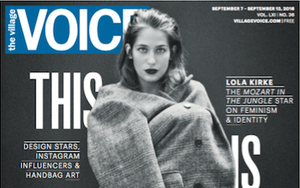 The Village Voice is launching its first dedicated fashion issue in print and online this week.

The issue corresponds with New York Fashion Week, which kicks off today and will be covered on The Village Voice’s Web site.

Suzan Gursoy, publisher of The Village Voice, told Publishers Daily that the launch of the fashion issue marks “the beginning of our pivot toward the style category as part of our culture coverage.”

Gursoy said the Voice “will thread style coverage throughout the coming months leading up to our next Fashion Issue, which is slated for release in spring 2017.”

The issue was guest-edited by former Michael Kors global creative director and style journalist Andrea Linett, with consultation from Joe Levy, who was named interim editor-in-chief of the Voice after Will Bourne was fired last month.

Samuel Hubbard Shoe Company is running advertising on the Voice’s fourth cover and the dedicated fashion microsite on VillageVoice.com, which launched in tandem with the issue.

“We are in dialogue with more fashion advertisers regarding future programs,” Gursoy said.

Going forward, readers and advertisers of the Voice “can expect to see the build of staple columns and departments that will have a consistent presence post-relaunch,” Gursoy said.

The Voice is planning an “extensive relaunch” across its print and digital properties, slated for 2017.
fashion, newspapers, redesign
Next story loading