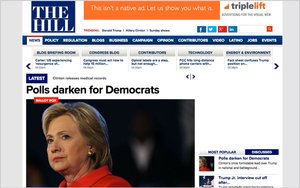 The Hill is launching a new paid subscription vertical, The Hill Extra: Healthcare, which focuses on healthcare regulation and policy information.

The healthcare vertical is the first of five paid verticals to be part of The Hill Extra, The Hill’s collection of paid service offerings announced in May.

The service offers insider information for an audience of congressional lawmakers, executive branch officials, advocacy groups and thought leaders who “have a need to know the most sophisticated information” about Washington D.C. policy-making, chairman and CEO James Finkelstein told Publishers Daily at the time.

The digital-only content of The Hill Extra is behind a pay wall, available exclusively to subscribers.

Finkelstein stated there will be a “continued expansion of our suite of services in the coming months.”

Meghan Milkowski, president of The Hill Extra, will oversee the vertical and any additional verticals slated to launch in the near future.