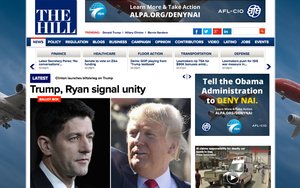 The Hillhas named a new publisher, CRO and multiple staff hires, as well as announced a new vertical accessible only to paying subscribers. Called “The Hill Extra,” this will be The Hill’s first paid service offering.

Before this, Derlega was SVP at National Journal. She also previously worked at The Hill as ad director.

Derlega replaces current publisher Adam Prather, who has been promoted to chief revenue officer, a new position at The Hill.

“We’re expanding so fast, and I needed somebody who was an independent worker and could work with me on the big, new ideas,” Finklestein told Publishers Daily. “Now we have more firepower.”

The Hill also added dozens of new employees to its editorial, social media and business teams.

“We are aggressively accelerating the expansion of our editorial team, both to constantly improve and broaden our coverage in order to provide even more value to our readers,” stated editor-in-chief Bob Cusack.

The Hill is also expanding its editorial offerings with The Hill Extra, described in a statement as an “an indispensable tool for those who have a stake in being the first to know about political and legislative initiatives.”

The new service will offer insider information for an audience of congressional lawmakers, executive branch officials, advocacy groups and thought leaders who “have a need to know the most sophisticated information” about Washington D.C. policy-making, Finklestein told PD.

The digital-only content of The Hill Extra will be behind a pay wall, available exclusively to subscribers. The offering will launch sometime before September and will be led by Meghan Milkowski, who has joined The Hill as president of The Hill Extra. She previously served as vice president at Prometheus Global Media.

Finklestein added: “It is not information at the expense of our regular viewers — we are increasing our editorial staff by up to 25% outside the pay wall to bring more information to our readers.”