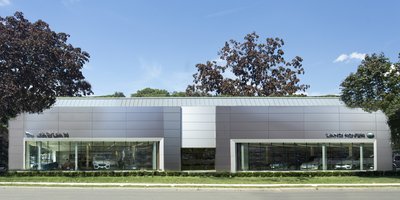 Jaguar and Land Rover are updating their retail facilities.

Penske Automotive Group has opened the first facility in the U.S., in Darien, Connecticut, under the British luxury carmaker’s new global design standards, which it is calling "Arch."

The new dual-branded facility exemplifies a new generation of retail facilities being developed as the Jaguar and Land Rover businesses continue to expand.

Every Arch facility will showcase the expanded Jaguar and Land Rover lineups and will prominently feature elements of glass, walnut and sophisticated lighting to give the space a fresh and luxurious feel, the company says. A majority of the retail network is expected to be completed under the new design by 2020, with a total U.S. retailer investment of $1.5 billion.