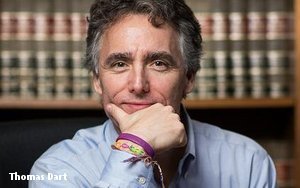 The U.S. Supreme Court has refused to hear Illinois Sheriff Thomas Dart's appeal of an order barring him from continuing with an initiative against online classifieds site Backpage.com.

The Supreme Court's order leaves in place a decision by the 7th Circuit Court of Appeals, which issued an injunction prohibiting Dart from attempting to persuade credit card companies to stop working with Backpage.

Dart argued that the appellate court's order infringes his First Amendment rights to express his opinions. "The fundamental problem with the Seventh Circuit’s decision to enjoin Sheriff Dart from further communications about Backpage is that the ruling violates Sheriff Dart’s own right to speak about matters of public concern," his lawyers argued in a petition seeking Supreme Court review.

The legal dispute between Dart and Backpage.com erupted last spring, shortly after Dart wrote to Visa and Mastercard on official letterhead and asked them to stop allowing their credit cards to be used to purchase "adult services" ads -- which many observers say are actually prostitution ads. Soon after Dart approached the companies, Visa and Mastercard stopped processing payment for transactions on Backpage.com.

Backpage urged the Supreme Court to reject Dart's petition. The classifieds site said its free speech rights were threatened by Dart's efforts to defund the site. "Sheriff Dart wrote to the card companies in his official capacity, and thus was wielding government power," the company argued.

Even though the Supreme Court rejected Dart's request for an appeal, Backpage is facing other potential problems stemming from its adult services ads, including a probe by the Senate Permanent Subcommittee on Investigations.

In addition, lawyers for a group of teen sex-trafficking victims recently asked the Supreme Court to revive a lawsuit accusing Backpage of facilitating crime through the design of its online classifieds site.

The teens' lawsuit was dismissed by a trial judge on the grounds that the federal Communications Decency Act immunizes Web companies for crimes committed by users. The 1st Circuit Court of Appeals upheld that order earlier this year, ruling that Web platforms like Backpage.com have broad immunity from civil suits stemming from activity by users.