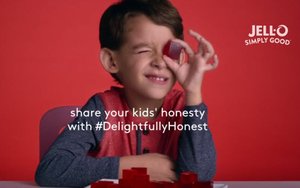 Kraft Heinz is launching a “clean” line of desserts targeted to kids, called Simply Good. The puddings are made with “real” ingredients like banana, cocoa and vanilla bean, and gelatin mixes flavored with fruit juices. All varieties are free of artificial flavors, dyes and preservatives, and come in pouches.

The campaign’s videos capture real kids’ unscripted, unfiltered reactions to topics such as their parents’ foibles, their own secrets, and their first tastes of the new Jell-O product. Message: “Your kids deserve a dessert as honest as they are.”

Four videos (one shown below) or clips from the same are being featured on the brand’s Facebook, Twitter and Instagram accounts, along with links to recipes using the new products at JellOSimplyGood.com, an area within the Kraft Recipes site.

Several parent bloggers/influencers have posted at #DelightfullyHonest, including photos from Jell-O-sponsored events where kids taste-tested the new Simply Good products.

“Jell-O Simply Good was inspired by real kids who surprised us with their honest, unprompted feedback about artificial ingredients,” said Nicole Kulwicki, head of marketing for Jell-O.