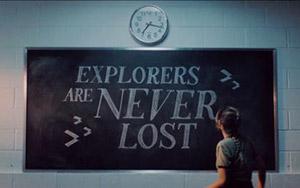 La Salle University is undergoing a "strategically-guided renaissance" to increase enrollment at the Philadelphia-based school.

Developed with agency Allen & Gerritsen (A&G), the "Explorers are Never Lost" brand campaign addresses the formation of the whole person, "one that encourages and supports students to blaze their own path as they prepare for successful careers and purposeful lives," says the agency.

This branding replaces a campaign called "Never stop exploring" which was developed before, but  confusingly shared the same title with the outdoor brand The North Face.

To coincide with this branding initiative, the University has adopted a series of strategic initiatives, including moving to a platform of institutional learning outcomes, the creation of five interdisciplinary centers of excellence, and the development of a program of endowed chairs and professorships. It will also lower its tuition from $40,400 to $28,800.

These changes are essential for the survival of the Catholic institution. La Salle's enrollment dropped to 725 students in 2015 down from the 2014 class of 860. This decrease resulted in a budget shortfall of $12 million, 9% of its operating budget, and laying off 23 employees, reports Philly.com.