40% Of Millennials Upgrade Their Wearable Device Every 6-12 Months 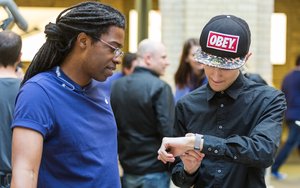 Many millennials tend to replace their wearable devices, even if they’re still working.

Four in 10 (40%) millennials replace their wearable every six months to a year, based on a new global study.

The study is based on a survey of 2,800 millennials across seven markets (U.S., U.K., Germany, Mexico, Brazil, Hong Kong and Malaysia) conducted by LexisNexis Risk Solutions.

Replacement of wearables by millennials also varies by country. Here’s a breakdown of millennials who replace their wearable within a year:

Millennials in the U.S. seem to hold onto their wearable for somewhat longer, with more than a third (36%) changing them every two years and 39% longer than two years.

Interestingly, it’s not necessarily because the devices break.

Overall, more than half (55%) of millennials get a new wearable simply because they want one with 43% moving to a replacement because the one they had failed.

U.S. millennials also tend to hang on to their smartphone a bit longer than their wearables, with 13% opting for a new phone every six months to a year, compared to their wearable replacement rate of 25%.

Globally, a third (33%) of millennials have a wearable device, with 31% of those in the U.S. owning one.

So in addition to the turnover rate of wearable devices, there’s still plenty of growth opportunity among those who have yet to try one. One of the barriers has been cost, especially in the smartwatch category.

The other key is that there’s plenty of space for marketing directly to consumers, since most (77%) of them look to their wearable as a personal device not typically used for any work-related activities, according to the study.

And that marketing likely will have to be continuous with the current turnover rate of the devices.