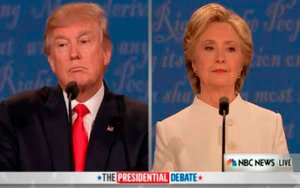 It might go without saying, but clearly, civility has taken a holiday -- perhaps permanently -- when it comes to political discourse in this country.

What a frosty, nasty debate that thing was on Wednesday night! The fault lay more with Donald Trump than Hillary Clinton, with his disruptive, angry mutterings and ill-chosen figures of speech. “Such a nasty woman!” he blurted out at one point half under his breath in response to a Clinton attack in which she brought up his admission in their last debate that he hasn't paid personal income taxes in years. Well, maybe she is nasty, but no more than he is.

Earlier, in a discussion about late-term abortions, he repeatedly used variations on the phrase “ripping the baby from the womb.” For heaven’s sake, Donald, can't you ever control yourself?

Then there was the exchange over Putin in which each of them called the other a “puppet.” It was like listening to children having a schoolyard spat.

Vladimir Putin “has no respect for this [pause] woman,” Trump said in a disgusted tone, pointing an index finger at Hillary Clinton.

“Well, that's because he'd rather have a puppet as president of the United States,” Clinton said, referring to Trump.

“It's pretty clear …,” Clinton shot back.

“You're the puppet!” Trump said, interrupting her.

“No, you're the puppet!” Trump said again.

And so it went. Meanwhile, I'm thinking: Chalk one up for the TV Blog -- we ran a photo here just this past Monday depicting Trump and Clinton both as puppets! Aren't we something?

Who won? The edge -- meaning, the victory (if such a thing can even be determined) -- went this time to Hillary Clinton. On TV, she presented a clear contrast to her opponent. In her bearing, poise and styling (yes, these things are important in a world of visual media), there were moments when she actually came across as presidential, something I had never felt about her previously.

She had succeeded in making it possible for a viewer to visualize her in the role of president, which is a very powerful impression to make. When this realization popped into my head during the debate – that she looks like the president -- I had the feeling that she had just won the debate, if not the whole election.

Not that her presentation was perfect. She was as guilty as Trump in trying to change the subject to something else when questioned about something negative -- in her case, questions about communications unearthed by Wikileaks that paint her in an unfavorable light.

Trump did the same thing, of course, when faced with questions about the sexual assault allegations swirling around him and the now-infamous recording of him talking to Billy Bush about the way he treats women. In Wednesday's debate, he forcefully denied all wrongdoing (an effective strategy, as a matter of fact, if done often enough) and also tried to shift the conversation to the battle against Isis, something he does frequently.

Hillary also used her “mocking face” (as someone I know likes to call it) at various times during Wednesday's debate. This expression, in which the centerpiece is a broad phony smile, plays only to her base. To everyone else (especially those planning to vote for Trump), the expression comes across as dismissive of Trump certainly, but also anyone who would support him -- her proverbial “basket of deplorables.”

So, when she declared near the conclusion of the debate that she seeks to be the president of all Americans, and not just those who would vote for her, the claim rang hollow because we are already aware of her disdain for roughly half the country.

Give her credit, though, for keeping the mocking face in check through more of this third and final debate than she did in previous debates. For most of this one, she maintained just the right touch -- talking tough to her opponent when necessary, emphasizing her experience in government and scoring points with answers and statements that were simply much more articulate than Trump's.

By contrast, as he has in past debates, he tended to speak in sentence fragments rather than complete sentences -- as if he gets his talking points from Twitter or headlines he reads on the run on various home pages.

One bright spot of the debate was the comportment and professionalism of Chris Wallace, the first-ever Fox News Channel personality to be chosen as solo moderator for a presidential debate. He was the best moderator yet in his ability to bring the candidates back on-topic when they strayed, and also keeping them mindful of the time clock -- tasks that are difficult, if not impossible, with these type-A personalities running for president.

And now, there are no more debates, just the question of who will win this thing Nov. 8 and, if Clinton wins, the question of whether Trump will concede defeat. Up until last night, this has never really been an issue. But now it is, thanks to Trump, who never ceases to spring surprises on us.