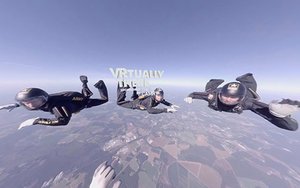 The series provides new partnership opportunities for brands with the “cubemercial,” the first-ever VR ad unit created specifically for the medium, according to the company.

In the premiere episode, the cubemercial is a 15-second ad from Toyota. The viewer is briefly taken out of the VR editorial content and put in a “cube,” where the ad shows up on all four sides of the viewer.

Niko Chauls, director of applied technology at Gannett Digital, told Publishers Daily that the ad is not floor-to-ceiling like full VR content because it would be “too immersive.”

The cubemercial format provides some separation between the content and the ad. The first episode takes viewers on a fighter jet aircraft carrier in the middle of the ocean, above cliffs where tightrope walkers teeter thousands of feet above ground and cruising in a hot air balloon. Each episode is about seven minutes long.

While viewers are used to pre-roll and pop-ups, the novelty of ads in virtual reality presents an added challenge. The team behind “VRtually There” expressed the need to ensure viewers understood the break between editorial and sponsored content.

Chauls said that the 15-second ads are longer than most video units in order to provide viewers with the time to process that break.

Kelly Andresen, VP of branded content at Gannett, said the weekly show will help viewers and brands understand the capabilities and opportunities in virtual reality.

A new “VRtually There” episode will come out every Thursday and lets viewers experience stories from a first-person perspective via three original content segments, filmed and produced by USATN journalists.

While other publishers have acquired virtual reality companies to produce VR content, the USATN team is “proud” that the series is being producing internally.

Christopher Sweigart, creative director of GET Creative, USATN’s creative studio, told PD that the goal of the show is to give viewers access to unique experiences and “get people excited about things they wouldn’t necessarily get excited about.”

The show is available via the USA Today app, the dedicated VR Stories app and “VRtually There’s” YouTube channel.

USATN hired David Hamlin, an Emmy-awarded former National Geographic producer and director, to be the executive producer for “VRtually There.”

“No one else is doing ad-supported virtual reality on a weekly basis,” Hamlin said. He stressed the need to focus on substance over technique and “story over stunt" in the VR series.

There are roughly 24 episodes planned over the course of a year.