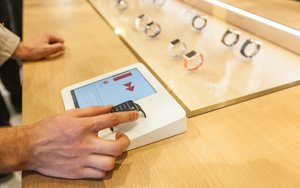 Adoption of wearables seems to be coming from all angles with multiple driving forces for consumers and businesses.

In addition to increased adoption from younger consumers and businesses with health and wellness programs, wearables adoption is set to triple over the next five years in various industries.

In the next five years, enterprise wearables adoption will grow to 35 million units shipped, according to a new report by ABI Research.

Along with increased volume, the functionality of wearables will expand to more use cases, according Ryan Martin, ABI research senior analyst and author of the report.

“One of the reasons is they have not only the ability but also the willingness to pay for something that could improve worker safety and better their bottom line.”

Another recent three-year study by Sprinbuk found that wearables can drive a measurable return on investment for companies that integrate fitness tracking wearables into their health and wellness programs.

That study, which included more than 22,000 participants in a large healthcare organization, found that employees using wearables cost $1,000 less on average for a company.

Consumers themselves are also a driver when it comes to wearables, although they see them as personal, non-work devices.

Another recent study of 2,800 millennials by LexisNexis Risk Solutions found that 40% of millennials replace their wearable within a year.

More than half (55%) of millennials said they replace their wearable because they want a new one, not because the current device is broken.

The majority (77%) of millennial consumers said they see wearables as personal devices that are not used for work, according to LexisNexis Risk Solutions.

However, enterprise use-cases might put pressure on the consumer wearables market and ultimately drive new features and types of wearables for consumers, according to ABI Research’s Martin.

“The use of wearables as a tool - to improve productivity, quality, compliance - in an enterprise environment will challenge consumer wearables and the experience they deliver to be much more personal than we see today,” Martin told the Daily.