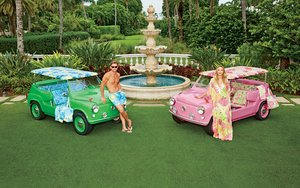 Neiman Marcus has just unwrapped its 2016 Christmas Book, and it’s as full of over-the-top offerings as fans have come to expect. Among them? A walk-on role in “Waitress” when the musical opens on Broadway ($30,000); a private quarterback camp with NFL legend Joe Montana for $65,000; an in-store slumber party (a steal at $120,000) or his and hers “island cars” designed by Lilly Pulitzer. (Those will set you back $65,000 each.)

As in the past, the catalog also includes several charity tie-ins, and each store contributes 10% of some gift proceeds to youth arts programs. The Dallas-based retailer also coughs up $50,000 from online sales for its own The Heart of Neiman Marcus Foundation.

For those who like gifts in motion, there’s the $1.5 million Cobalt Valkyrie-X private plane in rose gold. (It comes with two years of nonstop tech support.) And the year’s car, priced at $65,000, is an Infiniti Q60, which it calls “a 400-horsepower showstopper with a twin-turbocharged V6 engine.”

For the literary shopper, this year’s offerings also include a set of 36 Caldecott Medal-winning children's books, mostly first printings or early editions, for $100,000.

But of course, the most elaborate offerings are the store’s experiences, like a week at three English estates, including Alnwick Castle (home to the 12th Duke of Northumberland) for a grand feast, polo lessons  at Wilton House, and a jaunt to Blenheim palace, Winston Churchill’s place. (The $700,000 price tag includes helicopter travel between castles.)

And for $500,000 shoppers can buy someone they love a Grammy Award experience, including backstage passes and a Les Paul guitar.

But it’s not the toniest of times for Neiman Marcus. Last month, it reported a 3.3% drop in revenues for its fiscal fourth quarter, to $1.13 billion, while comparable revenues fell 4.1%. And its losses widened dramatically, from $32.9 million last year to a loss of $407.3 million. The retailer, which attributes its problems to reduced oil prices hurting its wealthiest oil-patch customers as well as changes in the fashion cycle, has been rumored to be on the block. Hudson Bay Co., the Canadian parent of Saks Fifth Avenue and Lord & Taylor, is said to be a suitor.