The Royals' Queen Helena Finds Joy In Our Electoral Misery 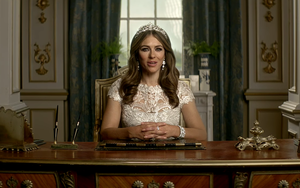 Well, at least someone is getting a kick out of the current election.

In advance of the new season of its show “The Royals,” E! Television Network has found the one person in the world who would find joy in our contentious presidential election contest: the show’s Queen of England.

As played by Elizabeth Hurley on the show, Queen Helena delivers one of the show’s patented “Queen’s speeches,” giving Americans the chance to return to British rule.

In the spot, Queen Helena” sites behind a desk directly addresses the audience, noting the country. "How's that whole President thing working out for you?” she says “It's been a few centuries since your Boston Tea Party mishap, and look who is getting royally tea-bagged now.”

Not to worry, she says -- the British Empire will welcome the country back with open arms, if it wants. As the spot closes, a voice over exhorts the country should “Make America Great Britain Again.”

“The show itself plays on the royalty and the monarchy,” Zach Hilder, executive creative director at BBH LA, the agency behind the spot, tells Marketing Daily. “They do these ‘queen’s speeches,’ so imagined what her take would be on what’s going on in our country.

The spot made its debut about an hour before the third and final debate on Wednesday night, Hilder says. “The people who were getting ready for the debate coverage were ready to see that,” he says. “It was a Twitter moment, which we thought was amazing. You’re always looking for that earned media when you put things in the culture.”

The spot will run through the election. "The Royals" premieres its new season on Dec. 4.