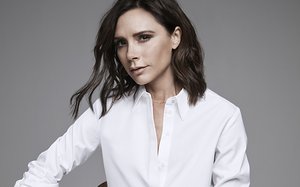 Target, which has used its capsule collections to work with such fashion royalty as Missoni and Lilly Pulitzer, plans to introduce Victoria Beckham for Target next spring.

Scheduled to go on sale in April, Target says the limited-edition line will show the designer’s softer side, part of her Victoria, Victoria Beckham lifestyle collection. And for the first time, Beckham will include clothes for children.

That makes perfect sense for Beckham, formerly Posh Spice. Besides being known for almost never smiling in public, she routinely makes splashy appearances with her four photogenic (and increasingly fashionable) offspring. “I was inspired to create the Victoria, Victoria Beckham line when I was pregnant with Harper,” the designer says in Target’s announcement. “With both the line and my daughter turning five, I felt it was the perfect time to extend into a more accessible price point and to celebrate both milestones by opening the range up to include childrenswear for the first time.”

But the line, with 200 items ranging from $6-$70, with most items under $40, will also help Target further up both its style and its kids’ game. Earlier this year, it launched Cat & Jack for kids, its most ambitious private-label attempt ever. And it’s identified both children’s wear and fashion as key areas in regaining its merchandising mojo.

Observers are concerned that Target’s turnaround efforts are faltering, and in its most recent quarterly results, comparable-store sales fell 1.6%, excluding digital.

And while it performed much better in its so-called signature categories, including fashion and kids, “Target's emphasis on apparel and other discretionary categories leaves it exposed to fashion cycles and competitive dynamics in these categories,” writes Erin Lash, an analyst who covers the company for Morningstar. “Execution risk also exists, as Target's ability to provide an innovative, trend-right, and high-quality product assortment at the right price is a key differentiator.”

Meanwhile, when it comes to fashion, the Beckhams are a busy bunch. Among his numerous endorsements, hubby David Beckham has a new campaign for H&M’s Modern Essentials collection, featuring the soccer star roadtripping with comedian Kevin Hart. Eldest son Brooklyn, 17, is already making waves as a photographer, and Romeo, 14, models. Both have worked for Burberry.