40% Already Use Voice Recognition Software, 70% Satisfied With It 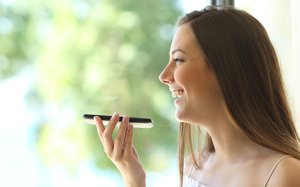 Voice recognition has been coming along for some time and much of it is quite a distance from when you had to repeat a question or command several times or dumb it down to a few simple words to receive any semblance of a useful response.

Not everyone yet uses voice recognition, but most of those who do are quite happy with it, based on a new study.

Almost half (40%) of smartphone owners already use voice recognition capabilities from Apple’s Siri, Google Now or Microsoft Cortana, according to a 10,000-person survey of broadband households conducted by Parks Associates.

But the usage patterns are somewhat different, based on demographics, with millennials more likely than others to use it. Here’s the breakdown of smartphone owners who use voice recognition:

By device, iPhone owners are more likely than Android and windows phone owners to use voice recognition software.

Voice recognition continues to increase in the home, with the addition of smart, connected devices, such as Amazon Echo. More devices of that type also are on the way.

As a bit of positive news for voice recognition, nearly three quarters (72%) of those using it are satisfied, with more than a third (38%) of those very satisfied. Only 9% are not satisfied using voice software.

This bodes well for voice in the home, as consumers get used to receiving responses from spoken questions or commands.

One of the drivers is speed. A recent Stanford University study found that speech recognition was three times faster than smartphone typing, with a 20% lower error rate.

In addition, the majority (66%) of consumers said they would be comfortable using voice commands with Amazon Echo, in a survey of 2,000 consumers conducted by BI Intelligence.

It’s not necessarily the consumer speaking that’s driving this. It’s the understanding of what is being said combined with quickly delivered, tangible responses through the technology.

Like most everything else in the Internet of Things, it all comes down to value delivered to the consumer.