Thanks To Its Merciless Abuse Of Millennials, CBS Sitcom Is Fall's Best New Show 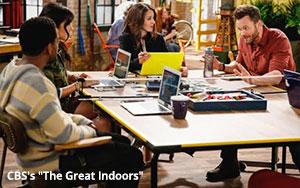 Millennial-haters, this is your show. And Joel McHale is your patron saint.

I could hardly believe my eyes and ears when I watched the first two episodes of this new CBS sitcom called “The Great Indoors” in advance of its premiere this Thursday night (Oct. 27). Instead of slavishly catering to Millennials -- just like every other sector of the media these days -- CBS decided to make a comedy series that totally hammers them. And that’s something we can all get behind.

In “The Great Indoors,” McHale, 44, plays a globetrotting adventure journalist named Jack who is the star writer on an outdoors magazine called Outdoor Limits. In the series premiere, he pays a rare visit to the magazine’s Chicago offices and learns that the magazine’s staff and operations have changed dramatically.

For openers, the mag is ceasing print publication and going Web-only, effective immediately. He learns this from Roland, the magazine’s aging publisher and owner, played by Stephen Fry, whose presence here is a casting coup for a network sitcom.

Suddenly, the office is populated by new Millennial hires with names like Emma and Mason. And Roland informs Jack he wants him to cease his outdoor adventuring in favor of a deskbound job as the editor/supervisor of these new hires.

The problem is, Jack thinks these Millennials are idiots with whom he has nothing in common. For one thing, they have job titles that boggle Jack’s mind such as “online content curator” (a title Jack immediately derides as “obviously made up”), “social influencer” and “digital conversation specialist.”

Everything these Millennials do rankles Jack. One of them, Emma, complains that she hasn’t been promoted yet, although she has only worked at the company for eight weeks. Another one of them insists on bringing her dog to work because it’s not just a pet, it’s “an emotional support animal.” In one scene, they all receive trophies -- not for any real achievement but for trying real hard.

When Jack talks to his young charges about his encounter in the wild with a she-bear and her cubs, they show him a viral video on YouTube of a family of bears swimming in someone’s backyard pool.

“You guys always expect work to be fun,” he lectures them. “You can’t just post animal videos and call it journalism. You can’t take a word, remove some vowels and think it’s a great app!”

Jack soon learns that one of the staffers, Clark, does a podcast from the magazine’s offices. But so far, the podcast consists of Clark interviewing co-worker Mason about Mason’s podcast. When Jack scolds Clark for this obvious waste of time and effort, Clark cries and runs out of the room. Those Millennials … what a bunch of crybabies, right?

But wait, there’s more. Following the crying incident, the company’s HR rep calls a meeting with Jack. “Young adults today are a very delicate group,” she tells him. “We offer an entire class on how to deal with them.”

The HR lady then reveals her true feelings about Millennials. Says she: “Sometimes I want to beat them senseless with their selfie sticks, but they’re the only reason many of us are employed right now, so get used to it!”

And so it goes -- 22 minutes of Millennial abuse. And it continues in Episode Two. Watching both episodes, I felt like Flounder in “Animal House” when he exclaimed: “Oh, boy, is this great!”

This show’s relentless attack on Millennials was so refreshing that I loved this show in spite of a number of characteristics I have been known to rail about in reviews of other sitcoms. For example, the word “penis” turns up in the script a mere minute and a half into the pilot episode of “The Great Indoors.” That might be some sort of record, but it didn’t bother me.

The good news here is that these elements do not fatally mar this show because its heart is in the right place. Its timely assault on Millennial culture makes “The Great Indoors” the most relevant new show of the fall season.

millennials, tv
2 comments about "Thanks To Its Merciless Abuse Of Millennials, CBS Sitcom Is Fall's Best New Show".
Check to receive email when comments are posted.
Read more comments >
Next story loading