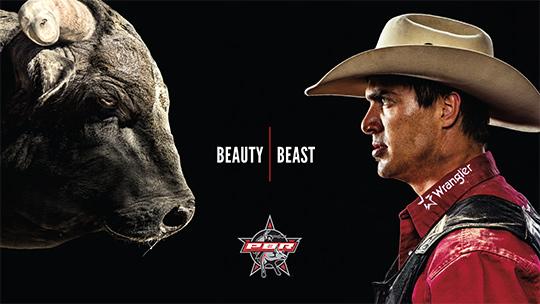 Calling it the “largest marketing effort” and the “first fully integrated, season-long brand campaign” in its history, Professional Bull Riders today will unveil “Vs,” a multi-media strategy timed to coincide with the PBR World Finals, being held Nov. 2-6  in the T-Mobile Arena in Las Vegas.

The “Vs” campaign is intended to “deepen PBR’s emotional resonance with current fans while stoking interest among new ones.”

“We’ve had marketing efforts in the past, but they were focused on driving ticket sales rather than overall brand awareness,” said Chad Blankenship, SVP, marketing for Professional Bull Riders. “We felt the time was right to take advantage of the growth and momentum of the league to invest in a brand effort that truly reflects the modern PBR.”

Professional Bull Riders, which traces its roots back to 1992, was acquired in 2015 by marketing and talent agency WME | IMG, which has used its global reach to build and enhance the league.

PBR said it is experiencing “the most successful year in its history,” with viewership on CBS Sports up 12% (1.3M average viewers per broadcast) and new attendance records during the 2016 tour.

The “Vs” campaign includes TV to break on CBS and CBS Sports during PBR World Finals coverage; with support from print, radio, OOH, digital and social.

Rock legend Steven Tyler of Aerosmith (and “American Idol”) fame, who signed this past summer as the voice and face for PBR, will appear in promos and the 60-second TV anchor spot, singing “Hold On/Won’t Let Go” (from his first solo album, the C&W-themed “We’re All Somebody From Somewhere”).

In addition to national airings on CBS and CBS Sports, “Vs” will get major exposure in and around local markets for 150 events in the U.S. and Canada.

“The campaign is rooted in one of the key elements of PBR that separates us from a lot of other sports,” said Blankenship. “We are pitting in direct competition a lightweight athlete against a heavyweight athlete: A 150 lb. cowboy sitting on the back of a 1,500 lb. bucking bull.

“The campaign is about highlighting the competitive tension that exists between the cowboys and the bulls. Honoring and respecting that battle. And celebrating both of them.”

Print shows bulls and cowboys facing each other with text that includes: Beauty/Beast, Well-Trained/UnTamed, Heavyweight/Lightweight, Bred For This/Born For This and Buck Off/Buck You.

As part of his solo tour, Tyler will  be the headliner at a World Finals performance, also scheduled to include Warrant, George Thorogood, Lita Ford and country stars Dustin Lynch and Jerrod Niemann.

Editor's note: Barry Janoff is a columnist for MediaPost's Marketing:Sports and the executive editor for NYSportsJournalism.com.