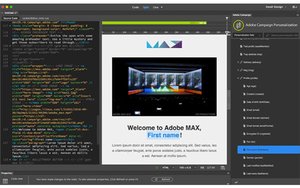 The integration is something of a no-brainer for Adobe, combining the email design capabilities of Dreamweaver with the cross-channel marketing capabilities of Adobe Campaign in the Adobe Marketing Cloud.

Ben Tepfer, product marketing manager at Adobe Campaign, also uses Dreamweaver for design, and talked with Email Marketing Daily about how the integrations will benefit email marketers and designers alike.

“It just makes sense,” says Tepfer. “We have the tool email designers are using and we have a tool email marketers are using, why not bring that together?”

Although the release date has not yet been determined -- Adobe is just now beginning to roll out beta testing -- the end result will be a native proprietary integration between the two products. By integrating Adobe Campaign and Dreamweaver, marketers can create and design emails in Dreamweaver that automatically sync to Adobe Campaign.

Designers will be able to work as they have been within Dreamweaver, but personalized data from Adobe Campaign can be pulled into the Dreamweaver user-interface for more contextual designs. As the integration will be bi-directional, Adobe Campaign users can also access Dreamweaver’s editing capabilities from within the Campaign interface.

“An email designer and email marketer are not often the same person,” says Tepfer. He says the integration will shorten the time to creation of email campaigns by allowing email designers and marketers to more easily access the information they need to complete a design and help teams to collaborate and manage campaigns in a more streamlined way.

Email marketers and email designers can effectively now work on the same email at the same time, similar to the collaborative capabilities of Google Docs. The latest document will always be saved on the Adobe Campaign server to ensure version control.

Tepfer says that design -- and Adobe’s history within the design community thanks to Photoshop -- is something that differentiates the cloud company. Although pricing has not yet been determined, Tepfer says he believes that like most Adobe product integrations, the integration itself will be free for customers off both Adobe Campaign and Dreamweaver.