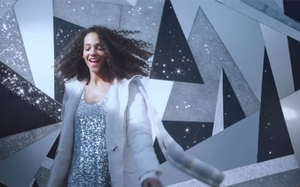 It ain’t easy breaking through retail’s red-and-green clutter this time of year, but Gap thinks it’s got the secret: You.

The new “Share your gift” brand campaign is “capturing the essence of the holidays in a uniquely Gap way,” says a spokeswoman for the San Francisco-based retailer. Instead of just focusing on the things people buy one another, it attempts to zero in on how we encourage others “by inspiring individuals to be the best version of themselves, and inviting them to share the spirit with others.”

She says the inspiration for the holiday effort comes from the Gap’s “core tenets of individuality, optimism and elevating the everyday.”

The TV spot, set to “Baby Boomerang,” the infectious glam-rock classic from T. Rex, is intended to “show the magic that can happen when individuals "Share their gift.” But she tells Marketing Daily that the global campaign’s main emphasis is on digital and social, and will also use in-store, outdoor, and direct mail. “We're focused on video content that can be used across an integrated campaign with a multi-screen approach,” she says. The ads were created by Gap’s inhouse team, in partnership with Untitled Worldwide.

Separately, its Banana Republic division also just uncorked its champagne-and-shaggy-dog laced holiday campaign, which it hopes will get people thinking about “more holding hands and less holding back.” Themed “Make it Matter,” it includes video, print, digital, mobile and out-of-home. Chandelier is the agency, and the company says the creative—meant to balance lifestyle and studio imagery—aims to tempt shoppers with warmth, shown by the “moments between moments, and the spontaneous chemistry of genuine, sincere attraction between groups of people during the holidays.”

The company also released preliminary sales results for the third quarter. Comparable-store sales fell 3%, with sales at the Gap flagships falling 8%. (A fire at a distribution center had an adverse impact on results.) Its Banana Republic brand slipped 8% as well, while Old Navy dropped 2%.

And for October, sales slipped just 1%, which includes a negative impact of about 3 percentage points from the fire.

Those results were slightly above expectations, writes Paul Trusell, an analyst who follows Gap for Deutsche Bank, with both Gap and Banana Republic beating expectations, “while Old Navy slightly missed our forecast.” He notes that the company says “customer response has been positive to Old Navy’s product.”