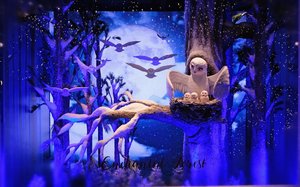 Cue the street-vendor chestnuts and red-kettle Santas: New York is firing up its Christmas retail engines with the annual unveiling of holiday windows.

And it’s more than a quaint tradition, even if sidewalk throngs feel like a throwback to a pre-Amazon existence. Not only do the windows stoke fourth-quarter tourism, they also provide an opportunity for retailers to differentiate themselves from one another, and strike whatever mood they think will lure pedestrians from the street.

Bergdorf Goodman, for example, is set to unveil “Destination Extraordinary,” while Henri Bendel is readying “The Bendel Love Wall.” Barneys New York is also mining goodwill toward men, with its Love Peace Joy Project. With the reveal scheduled for Nov. 18, this year’s display promises its customary witty commentary, especially “in the world's current climate of chaos and divisiveness,” it says in its announcement.

Increasingly, window unveilings are also turning into marketing events. Lord & Taylor, for example, recently revealed its 79th annual display, called “The Enchanted Forest,” partnering it with a cause campaign for Save the Children and a performance from Daya, the 17-year-old singing sensation.

It stuffed each of the five Fifth Avenue-facing windows with some 350 square feet of LED lights, for a display that 34 holiday hand-sculpted animals—including bunnies, mice, owls, bears and squirrels. And its façade is decorated with 9,000 feet of foliage, garland, and twinkling lights. (Lord & Taylor, now owned by the Canadian Hudson’s Bay Corp., is the oldest department store in the U.S., founded in 1826.)

And Barney’s says it plans to introduce crowds to its windows via a social media campaign, kicked off by Amy Schumer and Russell Westbrook. “The #LovePeaceJoyProject encourages audiences to share a photo of themselves forming a heart with their thumbs and forefingers to represent Love, making a Peace sign, or jumping for Joy,” the retailer explains, with each one generating a $5 contribution to charities. (Schumer is working with stylist Leesa Evan's STYLEFUND, which guides women on finding style confidence. And Westbrook’s Why Not? Foundation inspires kids.)

NYC & Co., New York’s tourism division, expects that of the 60 million tourists visiting in 2016, an estimated 5 million between Thanksgiving and New Year’s.