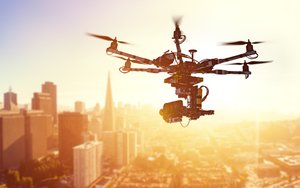 Two major organizations in the U.S. are teaming up to create a system to manage the increasing number of devices in the sky and another is focused purely on using drones for entertainment purposes.

While Intel launched a new drone to create aerial lightshows, AT&T and NASA recently signed an agreement to research and establish a traffic management solution for such Unmanned Aircraft Systems (UAS).

The areas of focus for this UAS traffic management solution will include flight path monitoring, flight planning, navigation, surveillance and safe tracking, according to AT&T.

“Working with NASA and others, we are designing the management system for a new frontier in aviation,” Mike Leff, vice president of civilian at AT&T Global Public Sector Solutions, said in a statement.

“Drones are already used in agriculture, public safety, construction, utilities, real estate and TV. This research can help support the commercial and private use of drones nationwide.”

Intel, which previously had coordinated 100 synchronized LED light-carrying drones to create digital fireworks shows in the past, appears to now have its eye on creating a new medium for advertisers, with the launch of a new drone.

The Shooting Star drone is specifically designed to create choreographed light shows in the sky for entertainment purposes, according to Intel.

Furthermore, the company broke the world record for most Unmanned Aerial Vehicles flying simultaneously with its recent 500-drone lightshow in Germany.

Intel has also received a waiver from the FAA to enable a single pilot to operate an entire fleet of drones at night.

Outside of researching the management of drones, AT&T also recently teamed up with Qualcomm to run trials on network-connected drones themselves. Those trials are happening at Qualcomm’s UAS Flight Center in San Diego, which is an FAA-approved test site designed to emulate real-world flying scenarios.

Those trials could ultimately have an impact on marketers and advertisers, according to Matt Walsh, director of business development for UAS and IoT solutions at AT&T.

“The interaction between drones and their environment could have a huge impact in areas such as agriculture for understanding the health of crops or traffic patterns in smart cities,” Walsh told the IoT Daily. “There could be opportunities for data analysis for things such as traffic density and flow to ensure that marketing is placed at the right place at the right time.”

AT&T is not the only network pursuing network-connected drones, however.

Verizon is also involved in bringing connectivity to the skies. The network recently completed successful trials of 4G LTE-connected drones operating remotely through the network.

As a result of the successful trials, Verizon now has a certification process for device manufacturers to officially connect drones to the 4G LTE network. The idea is to ultimately (once FAA regulations allow beyond-line-of-sight operation) enable remote drone operation from anywhere with 4G LTE coverage.

AT&T and NASA also plan to research the cybersecurity of network-connected drones with the idea of building it into the products and services themselves from the beginning.