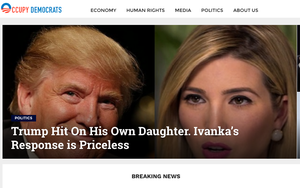 With 79% of its traffic generated from Facebook, “Occupy Democrats” was the No. 1 fake news publisher in terms of referrals from the social network, followed closely by “American News” (78%), and “Addicting Info” (73%).

By comparison, Huffington Post ranked highest among the actual news sites measured, with 29% of its traffic emanating from Facebook, followed by The New York Times (20%) and CNN (11%).

In fact, Jumpshot’s analysts found that Millennials are 16% less likely to click on a fake news story from Facebook than the general population.

The analysis, which examined Facebook news referrals among U.S. computer browsers between Sept. 11 and Nov. 15, found that women are far more likely than men to consume fake news feeds.

Women are 30% more likely to visit any kind of news site through Facebook than the average user, and 33% more likely to be referred to a fake news site.
5 comments about "Facebookers 2.5 Times More Likely To Read Fake News, Millennials Least Prone".
Check to receive email when comments are posted.
Read more comments >
Next story loading