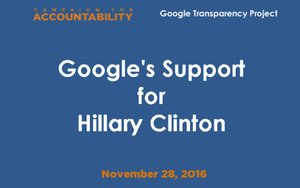 It noted how executives at the company hoped to extend its influence into the next administration.

The review shows at least 57 Google or related employees were affiliated with Clinton in her presidential campaign, in her State Department, at her family foundation.

About 10 people who worked under Clinton at the State Department later joined the New America Foundation, a Google-friendly think tank where Google Chairman Eric Schmidt supported the foundation as one of its top donors.

What can marketers expect from Google when it comes to the incoming political administration?

Although it's too early to tell, mostly because the administration is less liberal, the report provides insight into ways a "corporation can influence our democracy beyond simple financial donations."

Google-connect companies also played a role. Civis Analytics and The Groundwork, two companies that compile data and polling on voters for the campaign, were funded by Google's Schmidt.

The Groundwork was responsible for building data, analytics tools and infrastructure to target voters for fundraising, advertising and outreach, according to the CfA. Hillary for America paid the company more than $590,000 for technology services from July 2015 through Sept. 12, 2016, according to FEC disclosures.

But despite the company's support of Clinton, the company may benefit from a Trump administration, per the CfA.

"Joshua Write, a former FTC commissioner, could return as chairman, for example," per the report. "Wright is currently at Google's main antitrust law firm, Wilson Sonsini, and previously wrote Google-funded papers arguing the company should not face antitrust action."

The report names a long list of possibilities, all of which would benefit Google even in the new administration.