NFL Players Walk The Walk, Talk The Talk With 'My Cause, My Cleats' Effort 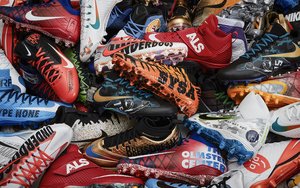 The NFL, which like most pro sports leagues has strict rules on player uniforms, cleats and on-field attire, this week is bending its own rules for a multitude of good causes.

For all games during Week 13 — beginning with the Dallas Cowboys at the Minnesota Vikings on “Thursday Night Football” (NBC, NFL Network, Twitter) — some 500 NFL players will be able to wear cleats that they each have designed to support specific charities, events, people and causes, under the umbrella “My Cause, My Cleats” platform.

The league, NFL Players Association, and the players worked with NFL partners Nike, adidas and Under Armor to create the plethora of shoes.

“These will be seen on nationally televised games, so it will bring so much attention to so many causes,” said Alfred Morris, running back for the Cowboys, whose cleats will support The Salvation Army. “This is the first year we are doing this. Even if you are not involved with a cause, we want people to relate to them and get actively involved.”

Following the games, the league said each player would have the opportunity to raise funds for their respective cause by auctioning their cleats at NFL Auction. All of the funds raised will be donated to the designated charities, which must have 501c3 status, according to the NFL.

A “My Cause, My Cleats”-themed TV spot broke this week as part of the NFL’s ongoing “Football is Family” effort with the tag line, “Every Cleat Tells A Story.” The spot shows wide receiver Brandon Marshall of the New York Jets designing his cleats along with kids from his Project 375 foundation, which focuses on promoting awareness of mental health.

In addition to on-air visuals and mentions during broadcast games, support includes a dedicated Web site, social media and a online player platform in partnership with The Players’ Tribune.

The initiative is a culmination of 18 months of collaborative work between the NFL and its players.

“One of the great NFL traditions is how our players passionately support important causes in their communities and around the globe every year,” said NFL commissioner Roger Goodall at a media event. “They are incredibly creative by nature so we are not surprised how they are seizing the opportunity this week with inspiring expressions of their charitable commitments on their cleats, online and through social media.”

Some players have joined together to support a specific cause.

Among the various individual messages:

• Drew Brees, quarterback for the New Orleans Saints, will wear gold cleats featuring Brees Dream, his foundation that works to improve the quality of life for cancer patients and their families.

• Kirk Cousins, quarterback for the Washington Redskins, will support the International Justice Mission, a non-profit group that works to protect people worldwide from such situations as human trafficking, slavery and sexual assault.