British Airways Could Give Passengers A 'Digital Pill' 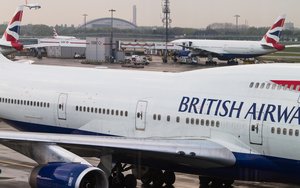 An airline may think it has an answer to jet lag. The catch: the traveler would have to swallow a ‘digital pill.’

British Airways has applied for a patent for ‘controlling a travel environment’ by obtaining passenger data, most notably from sensors, some of which would be ingested by the passenger.

The idea is that airline personnel on board would know when the passenger is awake, asleep, hungry, hot or cold and could, at least conceptually, attend to those needs at the most appropriate time.

I had heard of this and wasn’t sure if it was true, until I got the entire U.K. patent application.

The patent application states: “Digital pills or other ingestible sensors, that detect internal temperature, stomach acidity and other internal properties and wirelessly relay this information outside the passenger’s body.”

But there’s more, including suggestions that personal data be collected before a person even boards a flight. It reads:

“The passenger sensors may also be configured to collect data relating to aspects of the customer before boarding the flight, for example over a predefined period of time preceding a scheduled flight and/or on the day before boarding the scheduled flight. The pre-fiight collected data can be stored by the respective passenger sensors and/or provided to the passenger's mobile device for use in determining and scheduling events associated with the journey segments.

The application references numerous different sensors to collect passenger data, sensors that ‘can vary depending on the physiological state of the customer.’

Of course, this is a patent application and not a planned rollout. However, it does give an indication of how at least some execs at one airline are thinking.

Whether British Airways -- or any other airline -- can persuade flyers to take a digital pill should be quite interesting to monitor.

Now, if airlines could just take off and land on time….among many other things.