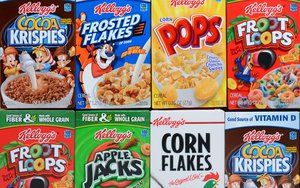 The Kellogg Company has become the latest to stop advertising on the right-wing Breitbart News Web site due to concerns about its content.

Other brands that also have recently announced policies to stop allowing their ads to be on Breitbart, in response to complaints from consumers, include Allstate, Nest, EarthLink, Modcloth, Warby Parker and SoFi.

Given programmatic digital ad placement and retargeting practices, brands frequently are not aware of all of the sites on which their ads are appearing.

“We regularly work with our media-buying partners to ensure our ads do not appear on sites that aren’t aligned with our values as a company,” Kellogg spokesperson Kris Charles told Bloomberg, which first reported the news. “We recently reviewed the list of sites where our ads can be placed and decided to discontinue advertising on Breitbart.com. We are working to remove our ads from that site.”

Bloomberg reported that a screenshot showing Frosted Mini Wheats was used in an online campaign to pressure brands not to advertise on Breitbart. A Twitter account called Sleeping Giants has been cited in various media reports as taking screenshots of ads on Breitbart and tweeting them at the advertising companies.

The Kellogg spokesperson confirmed to other media that Kellogg decided to stop allowing its ads to be on Breitbart after receiving complaints from customers who saw ads for Frosted Flakes and Frosted Mini Wheats on the site. He stated that Kellogg regularly reviews Web sites “where ads could potentially be placed using filtering technology, to assess site content. As you can imagine, there is a very large volume of websites, so occasionally something is inadvertently missed.”

Breitbart -- whose chairman was formerly Steve Bannon, now designated by Donald Trump to be his senior White House advisor -- has been criticized for expressing racist, misogynistic and anti-Semitic views. In an email earlier this month, Breitbart News Network CEO Larry Solov asserted to Bloomberg that Breitbart “has always and continues to condemn racism and bigotry in any form.”

Commenting on the controversy, Kevin Coupe, editor of the retail newsletter Morning News Beat, observed: “Gee, I can’t imagine why a company looking to appeal to a broad spectrum of consumers would be concerned about a website that refers to pundit Bill Kristol as a ‘renegade Jew’ because he did not support Trump or features stories with headlines such as ‘Birth Control Makes Women Unattractive and Crazy,’ or ‘Hoist It High and Proud: The Confederate Flag Proclaims A Glorious Heritage,’ or ‘There’s No Hiring Bias Against Women in Tech, They Just Suck at Interviews.’”

Coupe continued: “CPG companies have to make choices, and most are almost always going to choose a path that they believe will be seen as inclusive…because not being seen as inclusive by either customers or employees won’t be good for business. It is that simple. By this standard, I think Kellogg’s made absolutely the right decision. (It was not, no matter what anyone wants to say or think, a ‘right-or-left’ decision. It was a business decision.) Where this is going to get more complicated is if they are accused of being anti-American because they choose not to advertise in certain places. If this sort of thing gets any sort of traction, then we’re all in for trouble. Last time I checked, Kellogg’s has the same freedom of speech rights that Breitbart does. And that includes deciding where and when not to speak.”

As would be expected, a review of recent posts on Kellogg’s Twitter page include notes of praise and thanks (and vows to buy their brands) to Kellogg, Allstate and other advertisers dropping Breitbart, along with calls for boycotts of these same advertisers’ products from Trump supporters.

Bloomberg noted that AppNexus Inc. has also barred Breitbart from using its ad-serving tools because it determined that Breitbart “violated its hate-speech rules.”

But some advertisers have chosen to stick with the site, which had 19.2 million unique U.S. visitors last month, according to comScore.

Asked about its ad appearing on Breitbart, Nissan sent Bloomberg a statement saying that it “places ads in a variety of sites in order to reach as many consumers as possible,” and that “the placement of Nissan advertising is not intended to be a political commentary and there are no plans to change the advertising mix at this time.”

Breitbart told the Associated Press that Kellogg’s decision “to blacklist one of the largest conservative media outlets in America is economic censorship of mainstream conservative political discourse,” adding that this “is as un-American as it gets,” and to Kellogg’s “own detriment.”