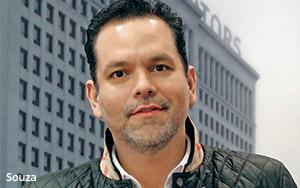 Souza will be based in Detroit and lead the Isoabar U.S. General Motors business. He replaces Steve Meyers, who will shift his focus to another undisclosed client, according to the agency. Isobar U.S. GM account director Ken Zendel will report to Souza. Zendel continues to be responsible for day-to-day responsibilities on the account while Souza will focus on bigger picture initiatives.

In addition to his GM duties Souza is tasked with developing other global accounts. He’ll report to Isobar U.S. Co-CEOs Geoff Cubitt and Jeff Maling.

A 15-year veteran of the agency, Souza previously headed operations for the agency in the cities of Belo Horizonte and Rio de Janeiro at Isobar Brazil. He’s credited with having managed key client projects such as FIAT Mio and FIAT Live Store, which won an Innovation Cannes Lion.

In addition to FIAT, Souza has worked with such blue chip clients as Procter & Gamble,  Telecom Italia Mobile, and Alpargatas.

Commenting on the promotion, Jim Butler, President Isobar US, stated, “Claudio will be a great asset to business development at our agency. His experience in managing huge projects that combine innovation and efficiency to brands make Isobar US even more valuable for the clients.”