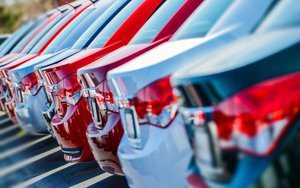 If Santa puts a big red bow on a good number of vehicles in December, automakers will break the all-time record for annual sales.

November U.S. auto sales were up 3.7% compared with a year ago, according to Autodata. General Motors and Ford both exceeded analysts' expectations. Even Volkswagen Group had its first good month since the emissions scandal broke a year ago.

“Automotive digital advertising costs increased sharply in November, up 5% compared with October,” Grace says. “Black Friday advertising, both in the automotive sector and elsewhere, played a big role in driving increased demand and costs in November.”

“While third-quarter results had the industry questioning if 2016 would again be a record-breaking year, a strong December could  tip the scale,” Brinley says. “However, any gain in 2016 will be smaller than recent years as the market is reaching a plateau.”

Despite strong truck sales, Fiat Chrysler Automobiles had an off month. The company's sales fell 14.3%. FCA fleet sales were down 42% year over year as the automaker continues to reduce its sales to the daily rental segment. Ram pickup truck sales were up 8% and the Chrysler Pacifica minivan sales climbed 13% and Jeep Renegade sales were up 30%.

Toyota posted its best-ever light truck sales for the month with the Highlander recording all-time best-ever sales, up almost 67%. VW Passat sales increased a whopping 133% and Golf SportWagen sales (which includes the  all-new Alltrack) were up 246%.

A 2016 record for auto sales remains within reach, despite a plateauing sales rate over the past several months, says Karl Brauer, executive market analyst for Autotrader and Kelley Blue Book.

“November provided two extra selling days, plus aggressive promotional activity from most manufacturers, to deliver record numbers for many brands,” he says. “A strong December finish will mean a new annual sales peak, one that could prove very tough to top in 2017. It will take a dramatic increase in consumer confidence to maintain, let alone eclipse, the 2016 number, but with a new administration coming online January 20th anything is possible.”

The election did not seem to have had a significant impact on sales — consistent with prior presidential election years, IHS Markit's Brinley says.

“Incentives continue to bear watching, as competition increases with slower growth,” Brinley says. “We expect highly advertised year-end sales to continue in December, whether the actual incentives available increase or not.”