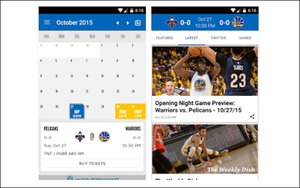 A Golden State Warriors fan is urging a judge to allow her to proceed with a lawsuit accusing the team, along with app developer YinzCam and beacon technology company Signal360, of eavesdropping on her through the team's mobile app.

"While there may be a hypothetical consumer who is glad to let three separate entities capture and analyze all of his or her daily interactions -- e.g., from ordering lunch, to conversing with colleagues at the workplace, to private conversations at the family dinner table -- defendants never told any of their users about the app’s invasive recording and audio usage practices," Satchell adds.

Satchell makes the assertions in response to a request by the Warriors, YinzCam and Signal360 to dismiss her lawsuit.

The dispute dates to September, when Satchell alleged in a class-action complaint that the app turns on devices' microphones, and then records conversations and other audio whenever it's running, even if people aren't actively using the app. Satchell, who says she used the app from April through July of this year, accused the companies of violating the federal wiretapping law by intercepting her private conversations without consent.

The app sends offers to fans when they pass concession stands, and notifies users about the possibility of seat upgrades at the team's home stadium in Oakland, California. To accomplish this, the app tracks users' physical locations via beacons, which transmit out audio signals that are picked up by phones' microphones, according to Satchell's complaint.

Last month, the Warriors, Signal360, and YinzCam asked U.S. District Court Judge Jeffrey White in Oakland to dismiss the complaint. They argued that the app doesn't violate the federal wiretap law, because the app only detects high-frequency signals, which are inaudible. They also say the app doesn't cause audio data to be transmitted from phones to servers or other devices.

Satchell is now asking White to reject those arguments. "Defendants’ unlawful 'interceptions' began as soon as the App was opened and the microphone began listening and recording, continuously doing so (seemingly over a four-month period) without consent," she argues. "These facts readily state an actionable interception."

The Warriors and other companies additionally contend the lawsuit should be dismissed on the grounds that Satchell didn't suffer any "concrete" harm as a result of using the app.

Satchell counters that a privacy violation is in itself the type of concrete harm that can warrant legal proceedings. "Unauthorized surveillance by private parties, whether it be eavesdropping or tapping a phone -- snooping, essentially -- has long been actionable in the courts," she argues. "And it is the snooping itself, not anything done with the information (blackmail, monetization, etc.), that has traditionally given rise to an injury."

Satchell and the companies are expected to present arguments to White in January.