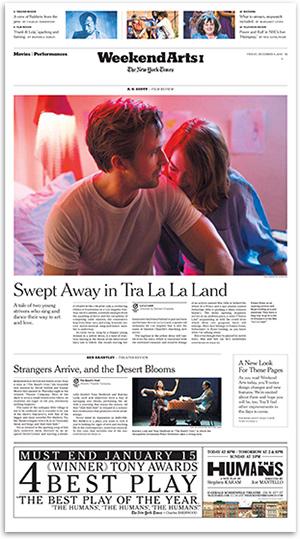 The New York Times has redesigned the Arts section in its print edition, giving it a cleaner layout and adding theme-specific reviews for each day of the week. The Times also introduced new features to its digital Arts section.

“At a time when many competitors are cutting back, we are investing in the quality and breadth of our arts coverage,” stated Dean Baquet, executive editor of The New York Times.

He added that the newspaper has more critics and culture reporters on staff than any other daily publication.

The Times’ Arts coverage, which includes the Arts section from Monday to Thursday and Saturdays, the Weekend Arts on Fridays and the Arts & Leisure section on Sundays, will now have a new “skybox” — or teaser above the masthead — on the cover page to give readers a guide to content inside the section.

Additionally, two features of the Times’ online Arts section will now be included in the print edition. Watching, the Times’ new TV and film recommendation guide, will publish in the first section of Weekend Arts on Fridays. Critic’s Picks, which reviews film and theater, will also feature in the paper’s print edition.

Danielle Mattoon, culture editor of The New York Times, stated: “Whether you’re reading us in print or online, we’re all living in a digital world. Today’s changes are about helping our readers navigate the chaos of choice they face every day.”

The Times will also add features to its digital presence. The publication is introducing a video-driven project on Instagram called “#SpeakingInDance,” which profiles dancers and their “thoughts and feelings” behind their work.

As part of the Times’ newfound commitment to making 360° videos a part of readers’ regular news consumption, the online arts section will also include 360° videos of performances.

Also, classical music playlists will be available online for listeners.