Rule Proposed To Connect Cars To Each Other In Real-Time 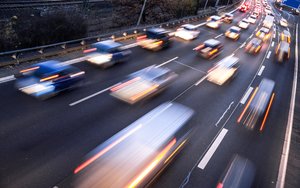 Connected cars may become more standardized in the U.S. soon, thanks to a rule just proposed by an agency of the Department of Transportation.

The new rule, from The National Highway Traffic Safety Administration (NHTSA), would require all new light-duty vehicles manufactured moving forward to include capabilities that enable the vehicles to communicate with other nearby vehicles.

The idea of the so-called vehicle-to-vehicle (V2V) communication systems is to enable cars to understand their context in relation to other cars to ultimately reduce collisions, according to Mark Rosekind, NHTSA administrator.

“Advanced vehicle technologies may well prove to be the silver bullet in saving lives on our roadways,” Rosekind said in a statement.

“V2V and automated vehicle technologies each hold great potential to make our roads safer, and when combined, their potential is untold,” Rosekind said.

Communications between vehicles would include location, direction and speed data and would refresh at a rate of 10 times per second. This is about how often a consumer GPS navigation unit updates its location when providing driving directions.

From a privacy standpoint, the data communicated between vehicles would not be linked to personal information, according to NHTSA.

One potential scenario in which V2V communication could help identify risks would be determining if a driver has enough distance and time to safely pass another vehicle (relative to any oncoming traffic), according to NHTSA.

In these situations, receiving data from oncoming vehicles could provide predictive information before the driver or sensors in his or her vehicle could typically determine a risk, according to NHTSA.

“We are carrying the ball as far as we can to realize the potential of transportation technology to save lives,” Anthony Foxx, U.S. transportation secretary, said in a statement.

“Once deployed, V2V will provide 360-degree situational awareness on the road and will help us enhance vehicle safety,” Foxx said.

automotive, connected devices, iot, real-time
2 comments about "Rule Proposed To Connect Cars To Each Other In Real-Time".
Check to receive email when comments are posted.
Read more comments >
Next story loading