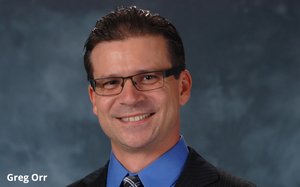 Walgreens, which has been trying to reward people for healthier behaviors for years, is looking to take it to the next level, adding more evidence that wearables boost wellness outcomes.

Earlier this year, it announced participation in the U.S. Precision Medicine Initiative with the National Institutes of Health and The Scripps Research Institute, translating data from 8 million customers’ app and online behavior, looking to link wearable use and better health.
Greg Orr, VP of digital health at Walgreens Boots Alliance, tells Marketing Daily what’s in it for Walgreens and why new tech is the key to its success.

Q. Let’s start with the origins of the Balance Rewards program. You started with step counters, right?

A. It goes back to Walking with Walgreens, which was a 2011 cause-marketing effort based in communities around the country. And it did so well, we thought, “Why not link it to rewards?” At the time, Fitbit was a small company and while not many people had one, we would allow them to plug into the program. That started us down this path of giving out small but frequent rewards, and this is important—you get a reward for every mile, every time you step on a scale. It’s not like you have to walk 50 miles to get something.

Q. What’s the significance of the new research?

A. We teamed with Scripps Translational Science Institute, looking at the way connected devices and apps can drive better long-term engagement in healthy activities, eliminating the need for manual tracking. It tracked data from more than 450,000 Walgreens Balance Rewards for healthy choices members in 2014, when most were still tracking manually, and the study results were recently published in the Journal of Medical Internet Research.

People tracking data like exercise, weight, sleep, blood pressure, blood glucose data, and tobacco use with devices remained engaged four times longer than manual trackers. And previous research has shown that people participating in the program lose more weight. About 17% of participants lost more than 10 pounds. But what I found most interesting is that people who walked more than a mile a day had better adherence to medication. So this is more than a loyalty program. It’s affecting people’s overall health.

Q. So what's in it for Walgreens?

A. Well, clearly it’s a loyalty play. But it’s more. Typically, it’s harder to get people with more health issues—a chronic condition like diabetes, for example-- involved. And we’re doing that, so that’s very exciting.

Q. Wearables are so new, and so evolving, that it’s been difficult to research their impact, with lots of accuracy issues. And a study published in the Journal of the American Medical Association a few months ago reports they’re ineffective for weight loss. What do you make of the dueling data?

A. Yes, there is conflicting evidence. A lot of research related to this puts too much of a burden on the participant. The top line of the study we just did was that the more data is collected automatically or passively, the better. The more health tracking switches from something difficult to something easy, the better it will be.

Q. But people do get bored with tracking. What’s the next step to keep people engaged?

A. A few years back, we partnered with WebMD to add what we call Go Beyond Tracking, to move the needle on behavior change and improve health. So people can opt for our basic program, which is very easy to use. Or they can go beyond to more in-depth challenges, like nutrition and stress management. They can choose their own adventure and get text reminders. The best part is that using chat, they can communicate with a pharmacist who can see that data. So the pharmacist can say, “Well, it looks like you’re walking a lot on weekends but not weekdays, and that can affect your glucose.”

To us, that is the next level – moving from loyalty play to health play.

A. So our program works with many devices but more and more, tracking will become passive and ubiquitous, and devices more affordable. I compare it to cars. Most people don’t know how many sensors are in their car until they get a lane-change warning, and the same thing is happening in digital health, whether it’s the ability to detect more kinds of activity or eventually, assessing how much we’re eating and how nutritious it is. That’s where things are headed, and that’s going to be the core of precision medicine.