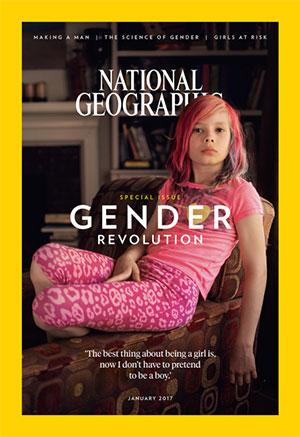 For the first time in its 128-year history, National Geographicis featuring a transgender person on the cover of its magazine.

The subscriber cover of the January 2017 issue will feature 9-year-old transgender girl Avery Jackson, who lives in the Midwest. The newsstand cover highlights individuals representing "a broad spectrum of gender identities and expressions," a spokesperson told Publishers Daily.

The “Gender Revolution” issue, which hits newsstands on December 27, examines the “cultural, social, biological and personal” aspects of gender identity, per the magazine. Stories examine American standards of beauty, the modern path to becoming a man and the science behind gender identity.

The powerful caption on Jackson’s cover reads: “The best thing about being a girl is, now I don’t have to pretend to be a boy."

Avery's father told TheNew York Times that raising a transgender child is the same as raising any child. A parent's role does not change, he said. In a 2014 speech that went viral, her mother, who described herself as a “conservative, Southern Baptist, Republican from Alabama,” said: “My God taught us to love one another. My daughter is a girl in her heart. She knows it. God knows it. And that’s good enough for me.”

Other stories in the magazine, “I am Nine Years Old,” asks kids in 80 homes on four continents how gender affects their lives. National Geographic also plans to air a two-hour documentary called “Gender Revolution: A Journey with Katie Couric” on February 6.

Other features include “Rethinking Gender,” which examines how science can help “navigate the shifting landscape of gender identity,” and “American Girl,” which contrasts the growing accepting of differences among American girls with the potential harm social media can wreak on young women.

Conversely, “Making A Man” looks at the traditional ceremonies once considered a rite of passage for a boy to become a man and how they have changed as societies modernize, leaving boys to “find their own ways to become a man.”

"Youths are articulate and smart and key observers, and they don't have a social veil. They'll tell you what they think, and that is a true reflection of how societies really are," Susan Goldberg, editorial director of National Geographic Partners and editor in chief of National Geographic magazine, told NBC Out.