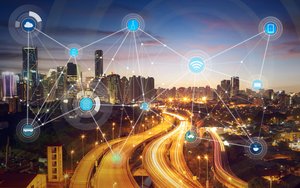 The Internet of Things involves billions of connected objects and that number continues to be projected up.

Last year, the five-year projection for the number of connected devices globally was 39 billion. That forecast, by Juniper Research, pegged the IoT opportunity in revenue and cost savings at $300 billion.

Around the same time, IC Insights projected the number of connected objects five years out to be 25 billion and IDC was expecting it to be 30 billion.

Now that billions and billions more devices have become Internet-connected, Juniper has an updated forecast for 2021 and it is even bigger than all previous projections.

The number of connected IoT devices, sensors and actuators will pass 46 billion in 2021, a 200% increase from this year, according to these latest projections.

The increase will be driven in large part by the reduction in the unit cost of hardware, down to average around $1, according to Juniper.

For consumer activity, security is seen as the major drag on the market.

“It is likely at this stage that the more savvy consumer is already cautious about investing in the IoT and, with significant media coverage ongoing, this sentiment will feed into the wider public in parallel with a greater understanding of what the IoT is,” states the report. “Addressing security concerns will in turn raise device costs, further hampering uptake.”

No matter how you view it, 46 billion, or any number close to it, is a lot of connected devices.