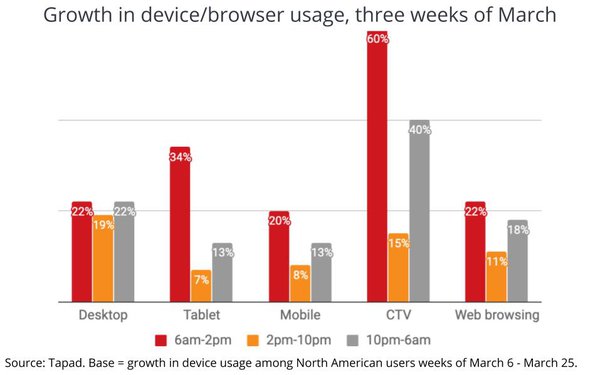 It's morning again in America, especially if you're on a digitally-connected device. An analysis of the first three weeks of the U.S. shutdown by Tapad shows that the 6 a.m.- 2 p.m. time period has become the new prime-time as many Americans turn to their digital devices -- computers, tablets, smartphones and connected TVs (CTV) -- for work, school, or other activities they would otherwise be doing out of their homes.

The data shows an especially strong spike in CTV and tablet usage, suggesting that at least part of the daytime surge in device usage is more for entertainment than for work or education activities. The same thing is probably true for a 40% surge in connected TV usage during the wee hours of 10pm to 6am.

"CTV soars during quarantines as content consumption times become more fluid throughout day and evening," Tapad notes in "Everyone's Gone Remote," a report that also provides detailed data on device and time period usage changes in other major markets worldwide -- in the case of Asia Pacific, going back to February.